Here, in reference form, is the complete story of Colt’s Model-P revolver as produced during the period 1976-1986. Referred to, by collectors, as the third generation single-action revolvers, this famous firearm has become a highly collectible and sought-after revolver. 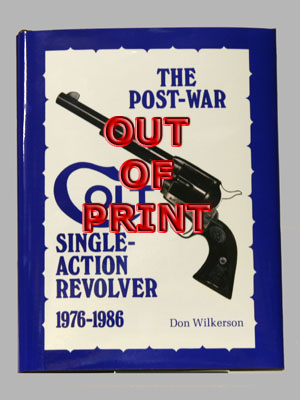 All major variations are studied, as well as the engraved revolvers, consecutive sets, special orders, special editions, and much more. This book ranges from a detailed look at each of the major components that go to make up the third generation Model-P revolver to complete production figures for each model.

This volume is written from a collector’s viewpoint and is designed to greatly facilitate a comprehensive study of Colt’s post-war era third-generation Model-P revolvers. In scope, accuracy, and completeness, this volume is accepted as the definitive work on third generation Colts by both advanced and beginning collectors.

A wealth of photography, both color and black-and-white, supports and compliments the text. This 8″x10-3/4″ deluxe hard-cover volume with dust cover has 324 pages. This book celebrated Colt’s 150th anniversary and is as relevant today as when it was first published.